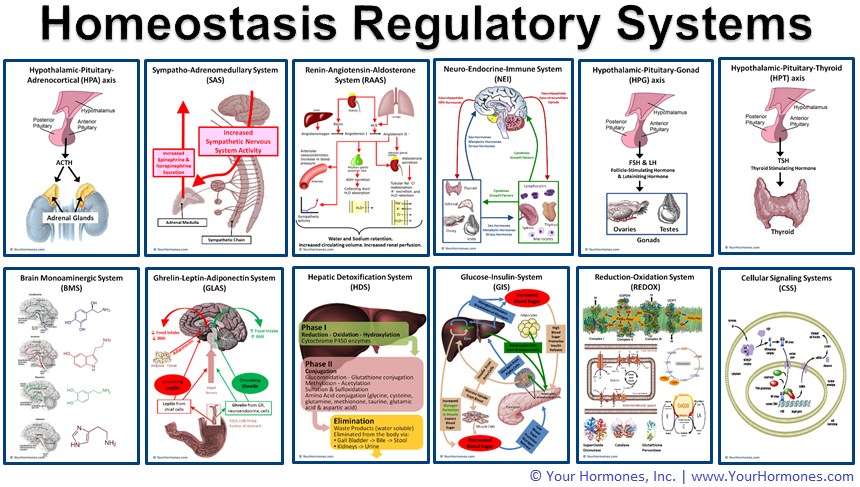 While the previous article discussed the concept of "adrenal fatigue", it also pointed out that the Generalized Adaptation Syndrome is the result of many homeostasis regulatory systems being effected by stress. We realize that there are multiple systems involved in clinical conditions that manifest as fatigue disorders. The various homeostasis regulatory systems that are affected by stress and the inability to adapt to stress include:

The hypothalamic-pituitary-adrenocortical (HPA) axis is involved in primary response to stress through an interaction between the midbrain and the adrenal cortex. In acute stress all adrenal hormones may become elevated, including cortisol, DHEA, as well as progesterone, aldosterone and andostenedione. In chronic stress, cortisol continues to remain elevated, while other hormones drop. The high cortisol levels may actually cause corticoid receptor resistance. If stress continues, adrenal exhaustion will occur, resulting in a drop of all adrenal hormones. Shifts in adrenal hormones affect every other regulatory system.

The sympathoadrenal system (SAS) is involved in primary response to stress through an interaction between the sympathetic nervous system and the adrenal medulla. Stress results in the SAS causing rise in epinephrine and norepinephrine (adrenaline and noradrenaline), excitatory catecholamines that also have neurotransmitter properties. These molecules stimulate various body systems, and affect every other regulatory system.

The neuroendocrine-immune (NEI) system is an interaction between the nervous system, the endocrine system and the immune systems as a response to stress. Increased immune system response may be beneficial in traumatic and infectious stress events. However, prolonged or inappropriate NEI activation will adverse affect every body system every regulatory system.

The glucose-insulin system (GIS) is responsible for maintaining appropriate blood glucose levels. During allostasis the GIS may allow higher glucose levels as a response to acute stress. If allostasis persists, then inappropriate glucose elevations will have adverse effects throughout the body. Increased glucose levels may cause excessive output of insulin, which can cause hypoglycemic (low blood susgar) problems in the short term, but lead to insulin resistance (prediabetes) if it continues. Abnormal glucose levels make the body more susceptible to stress. For example, the stress of a single hypoglycemic event makes a person more likely to have more frequent and more intense hypoglycemic events. This is a well documented example of regulatory system dysfunction getting worse as time goes on.

The renin-angiotensin-aldosterone system (RAAS) is a hormone system that regulates blood pressure, electrolyte and fluid balance. The allostatic response of the RAAS is to promote retention of fluid and sodium, and vasoconstriction as a response to acute stress. If homeostasis is not reacquired, this prolonged retention of fluid and sodium, and vasoconstriction can result in high blood pressure, which has an adverse affect on every body system. The fluid retention and high blood pressure make the body more susceptible to stress.

The hepatic detoxification system (HDS) is responsible for reducing the toxicity of molecules from both endogenous and exogenous sources through phase 1 and phase 2 detoxification processes. Stress induced increases of catecholamines decrease the efficacy of the HDS, which could affect the health of the every body system and every regulatory system, and make the body more susceptible to stress.

The cellular signaling system (CCS) is a very a complex system of cell-to-cell communication that supports proper cell function throughout the body. Stress may disrupt cellular signaling by modifying the amount and/or type of signaling proteins, or by decreasing cell receptor function. The most common aberration from normal cell signaling is the development of receptor resistance, in which the cells of the body become resistant – and ignore – the messages that are being sent to it. Insulin resistance is the most commonly recognized example of cell receptor resistance. Another example is glucocorticoid receptor resistance, which adversely affects how cells respond to cortisol

The ghrelin-leptin-adiponectin system (GLAS) is a complex system that regulates appetite, metabolism and energy homeostasis and growth. The GLAS dynamically interacts with growth hormone, IGF-1 and IGF-2, as well as insulin. The appetite suppressing actions of leptin and adiponectin are decreased by stress. Ghrelin, which increases hunger, is increased by stress. Acute stress may inhibit leptin and adiponectin, while the chronic stress and inflammation of obesity may cause increased leptin and leptin resistance resulting in excessive energy intake. Mental stress may increase ghrelin.

Homeostasis & Allostasis
These homeostasis regulatory systems are designed to homeostasis regulatory systems maintain a stable, relatively constant equilibrium in the internal environment. One system may control blood sugar; another may control fluid and electrolytes. Other systems can control levels of hormones or neurotransmitters, or balance antioxidants or control detoxification. When a system is maintaining balance it is said to be in homeostasis. Homeostasis literally means “similar state” – so things are about the same, which is ideal. When a system is out of balance it is in allostasis, which means “different state” – things are not ideal. The body may change to a different state when it has to respond to a demand. The heart rate, respiration and body temperature will increase with exercise – which is a healthy allostasis. The body typically returns to homeostasis after the exercise is finished. But is the heart rate, respiration and body temperature are elevated due to illness, such as a severe fever, it is an unhealthy allostasis.
AdrenoMend™ is a Hormone Specific™ Formulation that was formulated to support the function of every homeostasis regulatory system. Learn more about AdrenoMend™.

Introduction to Sign & Symptoms
When the body gets stuck in a chronic state of allostasis, with fatigue, aches and pains, rashes, trouble thinking, and other chronic signs and symptoms, it is stuck is a state of allostasis. It is important to note that most signs and symptoms are due to allostasis of different homeostasis regulatory systems. An example of the symptoms of fatigue, which may be due to allostasis of the hypothalamic-pituitary-adrenocortical (HPA) axis, the hypothalamic-pituitary-thyroid (HPT) axis or the brain monoaminergic system (BMS) to name a few. Another example of sign would be high blood pressure, which may be due to allostasis of the renin-angiotensin-aldosterone system (RAAS) or the sympatho-adrenomedullary system (SAS).

Next: Learn more about Signs & Symptoms of "Adrenal Fatigue"