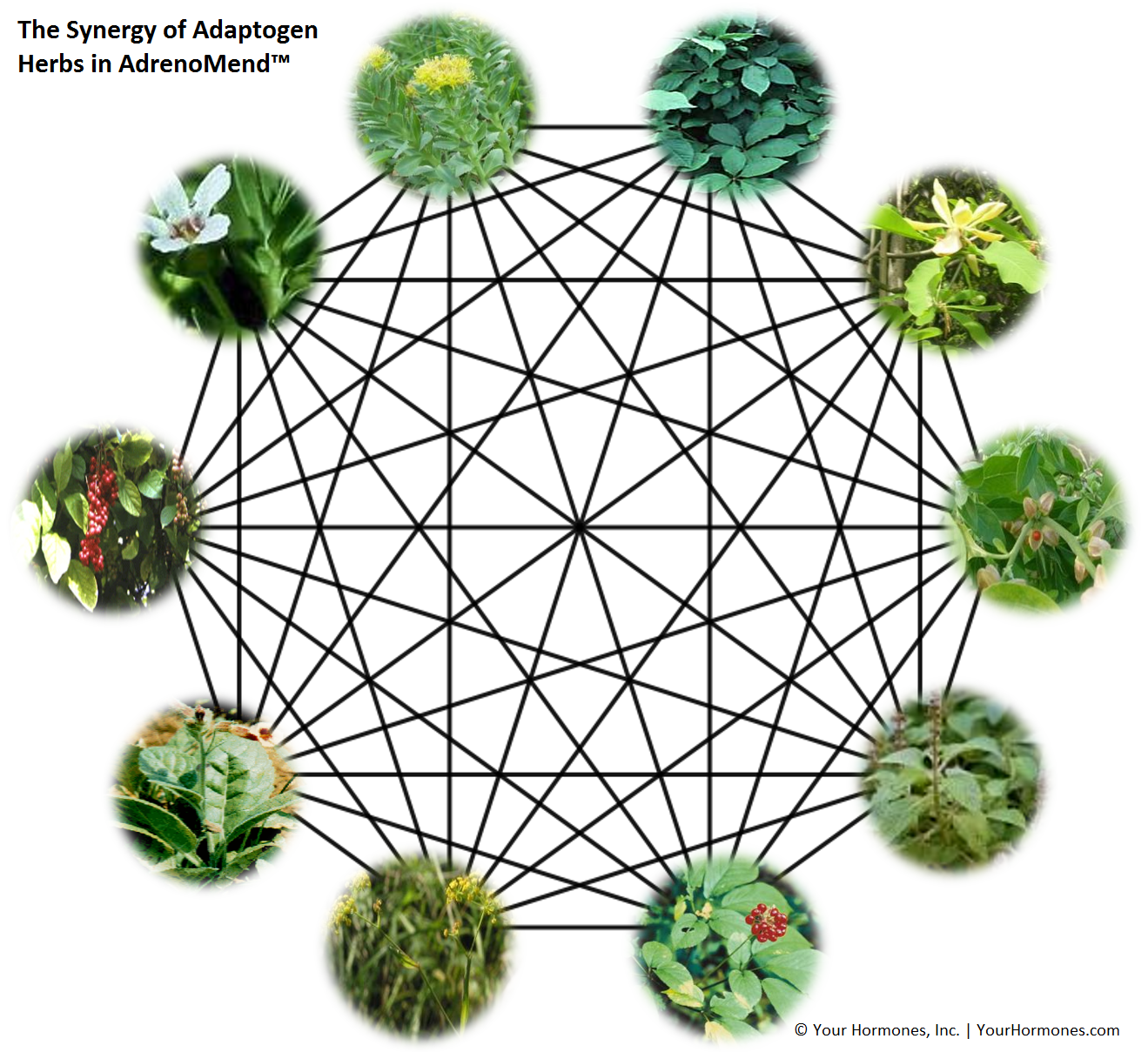 Adreno-Mend™ is the only formulation designed to restore normal function of the homeostasis regulatory systems by using adaptogenic herbs that work in synergy to help these systems recover from generalized adaptation syndrome and adrenal fatigue. To accomplish this properly, the adaptogens in AdrenoMend™ are formulated in such a way that adaptogen synergy is fully supported. In adaptogen synergy, the combined interaction of different adaptogens produces a total effect that is greater than the sum of the individual adaptogens.

The ten herbs used in AdrenoMend™ work together synergistically to restore normal function of the homeostasis regulatory systems. No single adaptogen is able to support all of the systems in a balanced fashion. Even those adaptogens that provide some support to nine, ten or eleven systems, do not support all those systems with the same intensity. However, when the ten herbs are properly formulated, we find that through adaptogen synergy they are able to support all homeostasis regulatory systems in a balanced fashion. 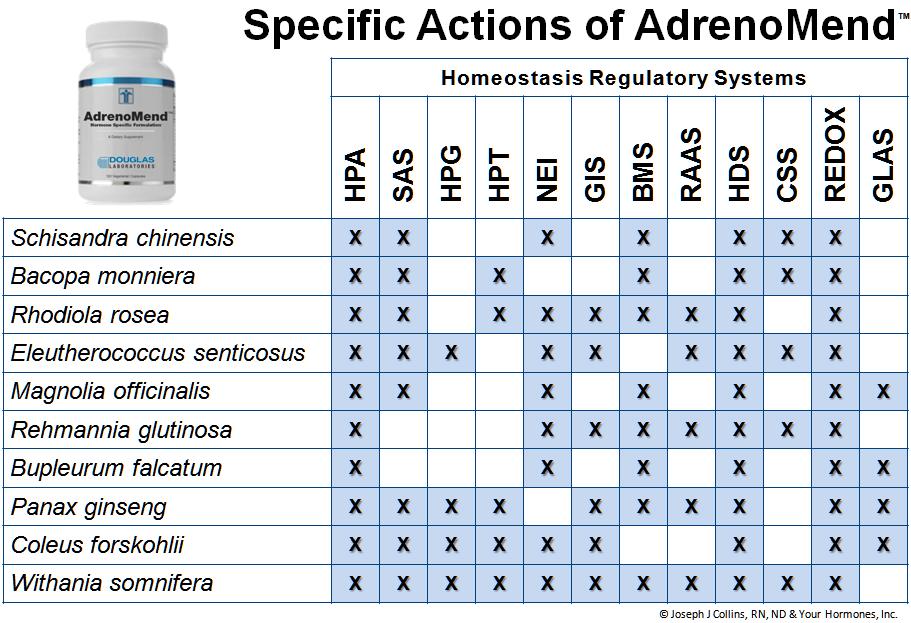 It is important to note that some popular adaptogens do not qualify for restoring balance to all homeostasis regulatory systems because the specific adaptogen has an adverse affect on one or more of the systems.

A classic example of an adaptogen that improves some regulatory systems, but strongly interferes with others is licorice (Glycyrrhiza glabra). While licorice can improve levels of cortisol (supporting & mimicking the HPA) and provides anti-inflammatory actions (supporting the NEI), it strongly interferes with androgen production (blocking the HPG) so that testosterone levels will drop. Licorice also disturbs the RAAS, resulting in increasing sodium and fluid retention and loss of potassium. While some patients may feel better temporarily, extended unsupervised use of licorice can cause problems. Lab tests that measure androgens, serum electrolytes, and serum osmolarity should be monitored when using licorice for more than a few days.

It is also important to avoid the use of stimulants in an attempt to treat adrenal fatigue. This includes herbs that contain methylxanthines such as caffeine, theobromine and theophylline. It is very important to avoid inappropriate use of high dosage excitatory amino acids such as tyrosine or phenylalanine, which can be converted to excitatory neurotransmitters. Using those amino acids can over stimulate the sympathoadrenal system (SAS) and cause even more adrenaline, which may give a temporary feeling of energy, but will interfere with adrenal recovery, and accelerate the onset of more severe symptoms. Licorice, stimulants, and excessive excitatory amino acids are not “working together” to restore homeostasis.

AdrenoMend™ is the only formulation designed to restore normal function of the homeostasis regulatory systems by using adaptogenic herbs that work in synergy. AdrenoMend™ should be part of a wellness protocol that includes healthy lifestyle, a good nutritional foundation, proper dosage guidelines for AdrenoMend™ and elimination of stressors. It is important to note that it is easier to eliminate stressors after AdrenoMend™ has started to restore some function to your homeostasis regulatory systems.

The Adrenal Health Protocol
The series of articles in the educational module on Adrenal Health discussed adrenal gland health, what stress really is, and how the body responds to stress. The articles also discussed the concept of “adrenal fatigue” and other fatigue disorders, and showed how to restore homeostasis to the various regulatory systems that are imbalanced when “adrenal fatigue” occurs.

Once you are familiar with this information you be able to get the best results from using the Adrenal Health Protocol. The protocol will guide you through the processes that will help you recover from “adrenal fatigue” and other fatigue disorders by restoring homeostasis to the various regulatory systems that are imbalanced.