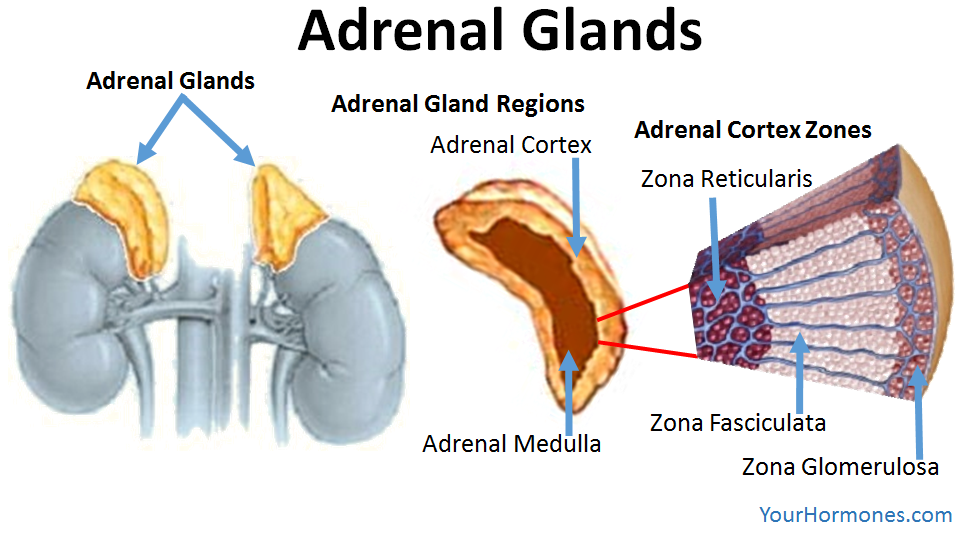 Structure and Hormones of the Adrenal Glands
The previous article about adrenal stress and adaptation discussed the concepts of stress, homeostasis and allostasis. We can now learn how stress affects the various regions and zones of the adrenal glands. There are two adrenal glands, one at the top of each kidney. The adrenal glands produce a specific amount of very important hormones on a daily basis to promote general health, and maintain the processes involved in homeostasis. The amount of those hormones changes due to a response to stress. Each adrenal gland has two different regions, the adrenal cortex and the adrenal medulla.
The adrenal medulla is the innermost core of the adrenal gland, which produces and releases the hormones epinephrine and norepinephrine. These two hormones are also known as adrenalin and noradrenaline respectively, and are also referred to as catecholamines or as neurotransmitters, because small amounts are also produced by the nervous system. The amount of epinephrine and norepinephrine that are released may be increased by different forms of stress.
The adrenal cortex is the outermost layer, which makes steroid hormones such as progesterone, DHEA and cortisol. The amount of cortisol and DHEA may initially be increased by different forms of stress, but the levels my decrease if stress is prolonged or too intense.
The adrenal cortex has three different zones, which are identified as zona glomerulosa, zona fasciculate & zona reticularis. Even though there is a slight overlap in what each zone produces, it is generally recognized that each zone produces the majority of specific hormones for that region.
The zona glomerulosa produces hormones with mineralocorticoid activity such as aldosterone, a steroid hormone that affect electrolyte levels and can causes water and sodium retention, and loss of potassium. Pregnenolone and progesterone are also made in this region, which is significant because even progesterone has some mild mineralocorticoid activity.
The zona fasciculate produces glucocorticoids such as cortisol, which is famous for being the “stress hormone”, but also has a number of important functions.
The zone reticularis produces androgens such as DHEA, and androstenedione, which can both act as precursors for sex hormones.

Adrenal Gland Response to Stress
Under stress, the adrenal cortex often makes less DHEA and androstenedione, and more cortisol, corticosterone and aldosterone. At the same time, the adrenal medulla will release more norepinephrine and epinephrine. This can result in an increase in blood sugar levels, increased heart rate, and increased heart muscle contractions, as well as an increase in the rate and depth of respiration. The body will also hold on to water and sodium and make less urine. The increased amount of fluid in the vascular system can help get through a crisis. This may be good in the short term because the muscles have more blood glucose, more blood pressure, and increased oxygenation. This is the fight or flight stress response, that allows a stressed person to either run from the stress or fight the stress. This is allostasis. The body is in a different state, and is prepared for fight or flight.
If this shift goes on for a long period of time it can lead to serious problems including elevated blood sugar, high blood pressure, decreased production of sex hormones and other problems. In addition to the adrenal glands, other regulatory systems can also be affected by intense or prolonged stress.

Next: Learn about Adrenal Fatigue

Learn how to order AdrenoMend™

Copyright © 1999 - 2023 Your Hormones, Inc. All rights Reserved.
Statements regarding products and services on this site have not been evaluted by the Food and Drug Administration
and are not intended to diagnose, treat, cure, or prevent disease.
The content is the opinion of the authors and does not represent the opinion of any party.
See Terms of Service and California Proposition 65.